To read in Polish go to: http://centrumsztukitanca.eu/recenzja-ze-spektaklu-dzien-w-ktorym-v-dala-mi-do-myslenia-albo-jak-pozbylam-sie-prokrastynacji/

Procrastination is the result of a competition between the limbic system and the prefrontal cortex. The limbic system is responsible for emotions and impulsiveness, including striving for an immediate reward. the prefrontal cortex, in turn,  is responsible for concentration, self-management, attention and goals, and perception of time.[1]  Sooner or later  each of us experiences effects of procrastination. Nothing unusual, nothing terrible. We delay trivial and important things, finding each time a good, sensible explanation.

Aleksandra Bożek-Muszyńska decided to ask the viewer a very important question: for what will the time come ? For many of us, finding answers is a heroic inner struggle both over time and in time, at least worthy of a poem. The artist knows. She creates this poem for us – literally, reciting it as a narrative for of the performance, and indirectly, through images of several women. Each of them is vibrant with movement, color, and each one surprises with its form. Each is different because each one shows a completely different person. They vary in age, a place of living, memories that keep them insecure. One thing is common –abandonment. The protagonists, in turn, succumb to the titled procrastination. The first one spends time dancing to the bitter end in front of a the TV set, as if clips on the MTV channel were a substitute of the desire to be a star, a dream implemented clandestinely, in the cold light glowing from the screen. The second woman harks back to a short-lived love, although it is unknown not known whether it is love or just the dream of a lonely woman on the dancefloor in a provincial disco club. We do not know if she is dancing for her Radek, or just fantasising about it. Maybe she just daydreams about paying attention to her. Another one is probably lonely, anyway, she feels like that. Her memories are filled with a sense of regret for the lost time: the summer, which will not come back. And as in Finland[2], the song which is the background to this story, the reasons for this regret are trivial and imaginary. They are another fabricated justification for giving up.

We do not know what happened with the characters of these stories. Did they get rid of their procrastination? Perhaps with age, according to results of research, they managed to get rid of fears, and decided to act. Perhaps it is only from the perspective of time that we are able to understand that putting our dreams off indefinitely, de facto we delay our whole life.

“The day when V. gave me food for thought or how I got rid of procrastination” is a poem about abandonment, but a comic poem. Its’ author skillfully plays with the viewer with its content and form. She teeters on the brink of kitsch and good taste, falling a bit into  Kamp aesthetics. Turquoise, shiny costume, bright makeup and exaggerated, stylized gestures and spontaneous choreography emphasize the relationship between the dancer and the viewer. They allow the spectator to put daylight between the question posed in the performance and himself, giving an instight into his own self. Cold light, stroboscope and spotlight, that marks the space, resemble the stylistics of a video clip. How often our memory evokes memories fragmentarily, as a blend of images, sounds and emotions. Does each of us create in our head countless video clips from our entire life? How often do we consciously play the actor-viewer game, hiding behind its form, just as the artist hides behind the portrayed characters?

Viewers need to answer these questions themselves. If they did not know where to start, Aleksandra Bożek-Muszyńska would provide possible answers at the end. She is perpetually ironic and she sings the possible answers to the melody of a hit by Violetta Villas The time will come. The melody of this song will din in the viewers’ ears long after the performance ends.

” The day when V. gave me food for thought or how I got rid of procrastination ”

The performance was created as a part of the Exchange: Change Time and Dance Project

Co-organizers: the SÍN Arts and Culture Center in Budapest, the Center for Contemporary Art Ujazdowski Castle

Strategic partner: the  Hungarian Institute of Culture in Warsaw 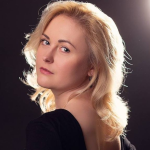